Venice Turpentine is a traditional, historic product for oil painters that causes some confusion because it has an archaic name that is misleading. Despite what the name implies, it is not a distilled solvent, but rather it is a tree resin. As a specialist product that is not commonly used anymore, it also generates a few questions from painters when they want to give it a try. What is it exactly and how do you use it? It’s almost solid in the bottle, how do you get some out? Are there any good modern alternatives?

After it has been gently warmed and stirred you can scoop out some resin to use in your oil medium recipe.

The word turpentine derives from the Greek word for ‘resin or balsam’ which came from the word for the terebinth tree, a type of pistachio tree, the sap or gum of which was used for turpentine resin before pine trees. What we now call turpentine, the solvent distilled from pine sap, was originally called ‘essential oil of turpentine’ or ‘spirits of turpentine’, and over time has been shortened to just ‘turpentine’. So the modern usage of ‘turpentine’ refers to the solvent distilled from the turpentine resin, but it used to refer to the resin itself. Only a few resins still use the archaic term ‘turpentine’ in their name. To avoid confusion some suppliers add the word ‘resin’ to the name, calling it Venice Turpentine Resin or Balsam of Venice Turpentine to prevent people thinking that the resin is a solvent. Resins that retain their essential oils are called balsams.

What is Venice Turpentine?

Larch Venice Turpentine is sold as the resin, not as a solvent distilled from the resin, and is derived from the sap extracted from the tree Larix decidua, Pinaceae. The sap is taken from European Larch trees that are usually grown in Austria or the Italian Alps. They are conifer trees like pines because they have needles instead of leaves and their seeds grow in cones. But unlike pines, they are not evergreen; they are deciduous. In the autumn, the needles of larches turn golden and then drop off the branches. The resin was shipped and traded through Venice, so got named for the place it was bought from. It has been in use as an oil painting medium since the 1500s. 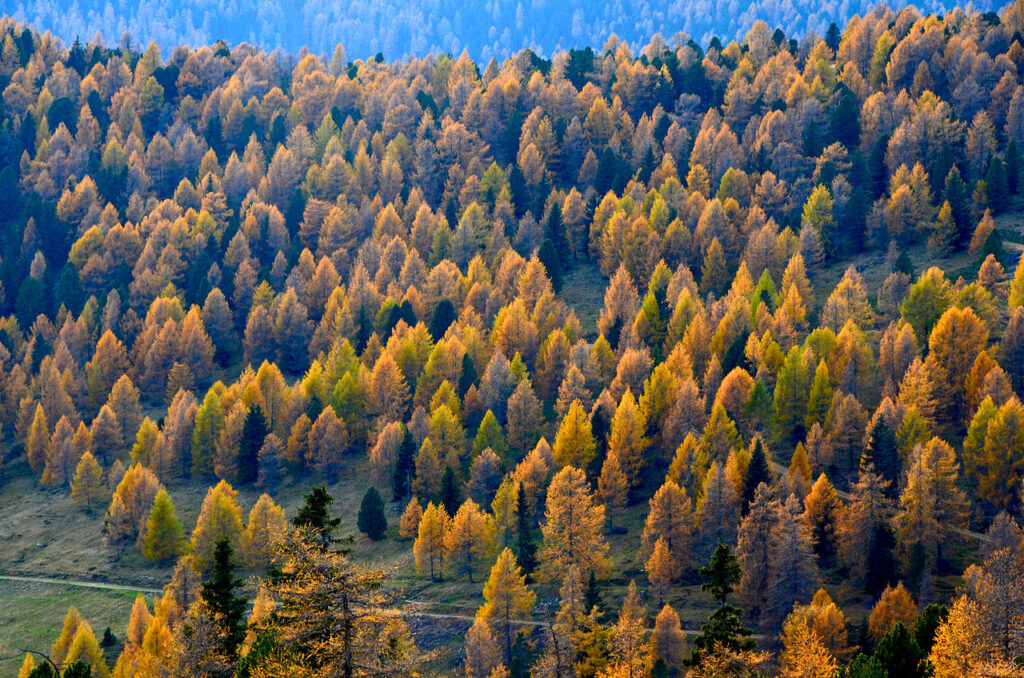 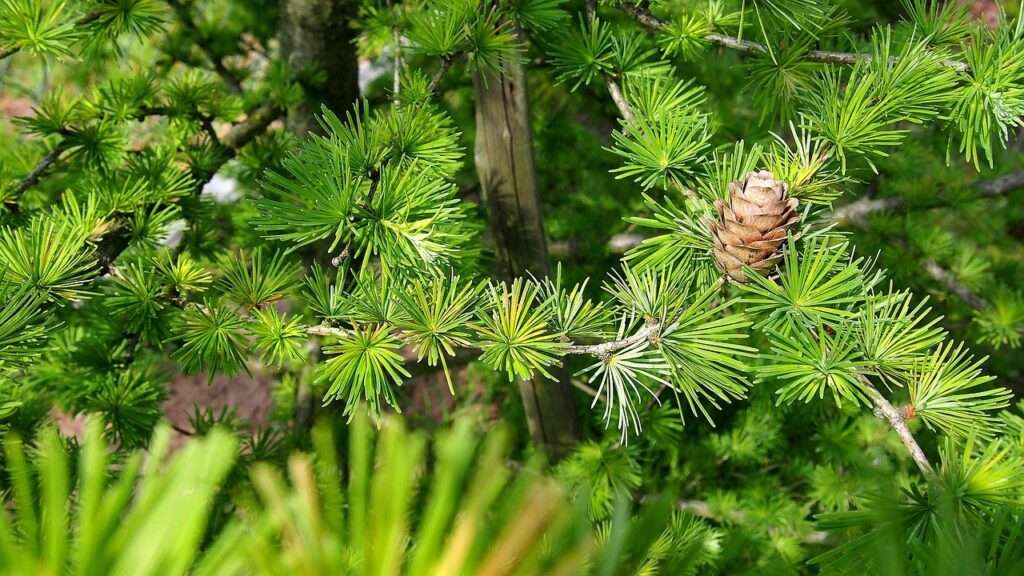 This resin goes by many similar names including Venice Larch Balsam, Balsamo Veneto Di Larice, Venetian Turpentine, Venice Turpentine, Venice Turpentine Resin, Venice Larch Turpentine, Genuine Venice Larch Turpentine, Austrian Larch turpentine, etc. The different names do not denote quality. There are resins from different sources that may be of different quality, but it is not the name that tells you that, as it is just a rearrangement of the words. The quality depends mostly on whether the product contains just the resin of the larch tree or has the cheaper rosin or colophony added to it. There is a product called Venice Turpentine that is used for treating horses’ hooves and is a dark brown sludge because it is just rosin dissolved in a solvent. Rosin is the solid residue left after a resin has been distilled to yield the essential oil or spirits of turpentine; it is a very poor material and should not be used for oil painting. If Venice Turpentine is not a clear yellow then it is not the pure quality you need for oil painting. But even among the 100% larch resins there are slight differences in characteristics so some painters find a preference for certain brands. 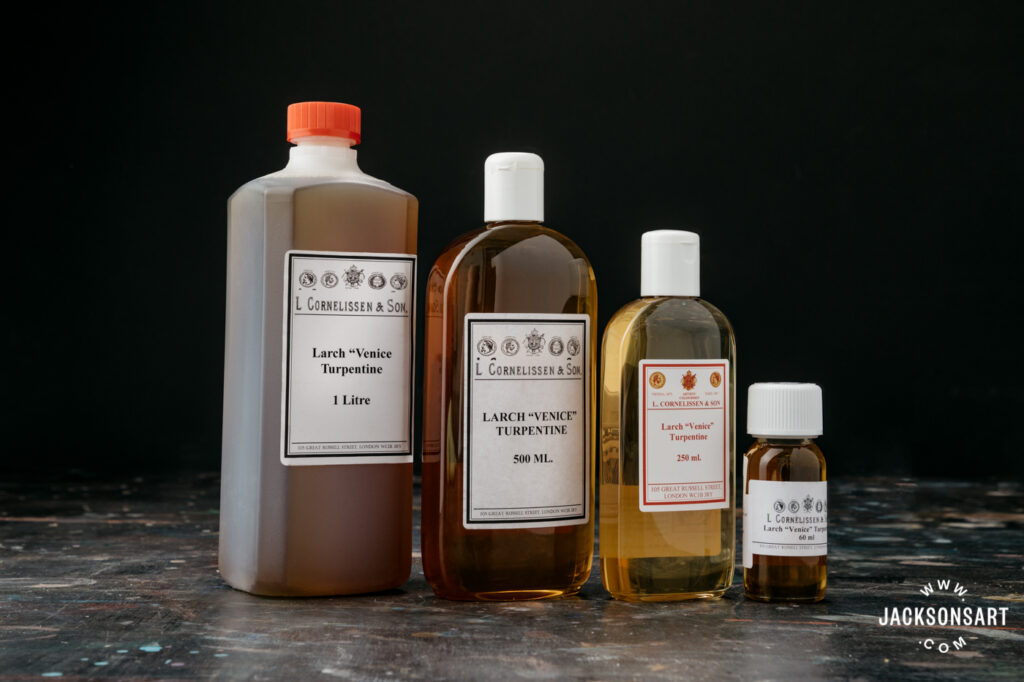 The 250ml, 500ml and 1 liter sizes are in soft, squeezable bottles. The most popular size is the smallest, a 60ml glass bottle. 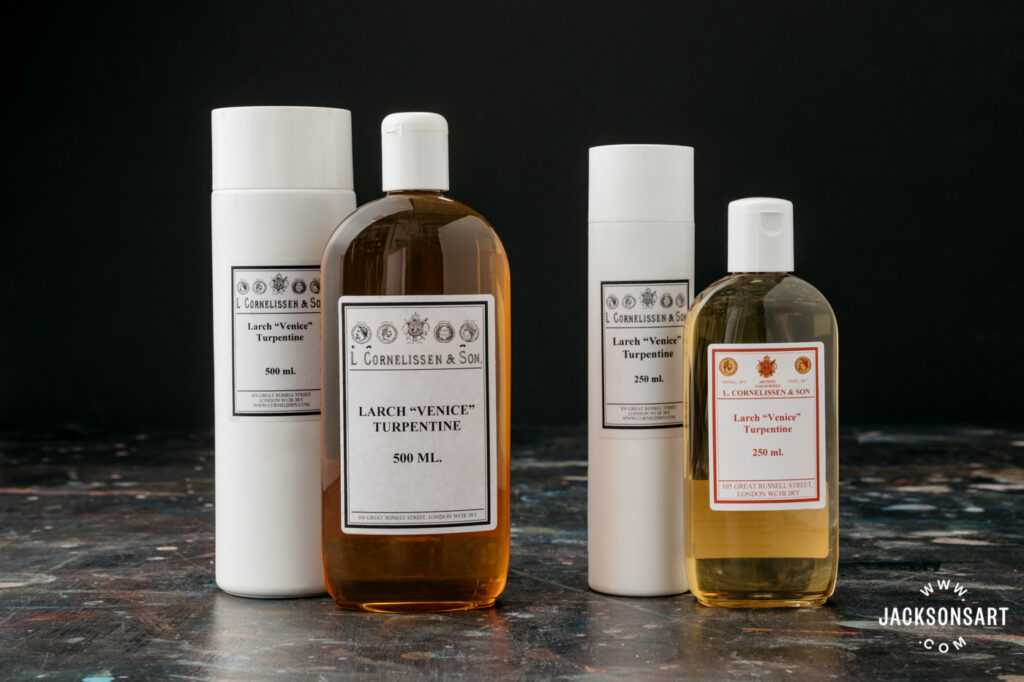 You might receive the 250ml or 500ml sizes in the new white bottles.

Because it is fairly expensive and you generally only use a small amount at a time, the most popular size at Jackson’s is a small 60ml glass bottle. It is thixotropic, meaning that it is a substance that is thick at rest but loosens up when stirred or agitated (ketchup is a common example – it becomes runnier when shaken.) But at room temperature, even when stirred, this resin is almost solid like semi-hard toffee and will not pour – it must be warmed gently to promote flow. You need to heat it each time you want to get some out of the bottle, it will quickly re-thicken as it cools. To loosen it, set the bottle in a container of hot water (maximum temperature 50°C, which is about the temperature of a very hot shower) and stir with a palette knife until you can scoop out the amount you need. To warm up the 60ml bottle I had to change the water for new hot water three times before the resin was sufficiently warmed through to stir easily, as the water kept cooling off before the resin was warm enough. If you do use larger quantities of the resin, it is also available in three sizes of squeeze bottles, which does make dispensing a bit easier and cleaner. 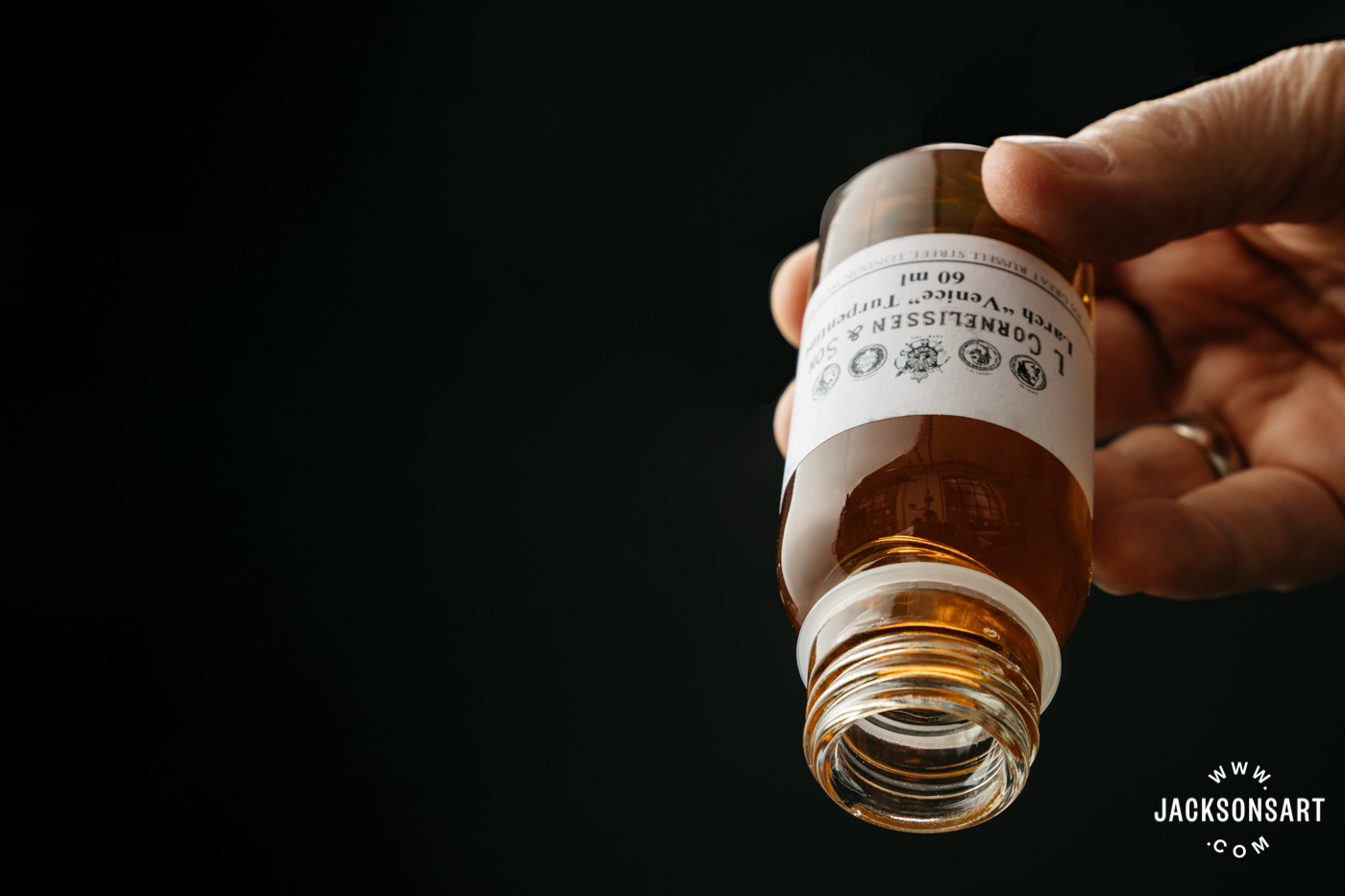 The resin is so viscous it is nearly a solid. I held this bottle upturned for a full minute and there was no change. 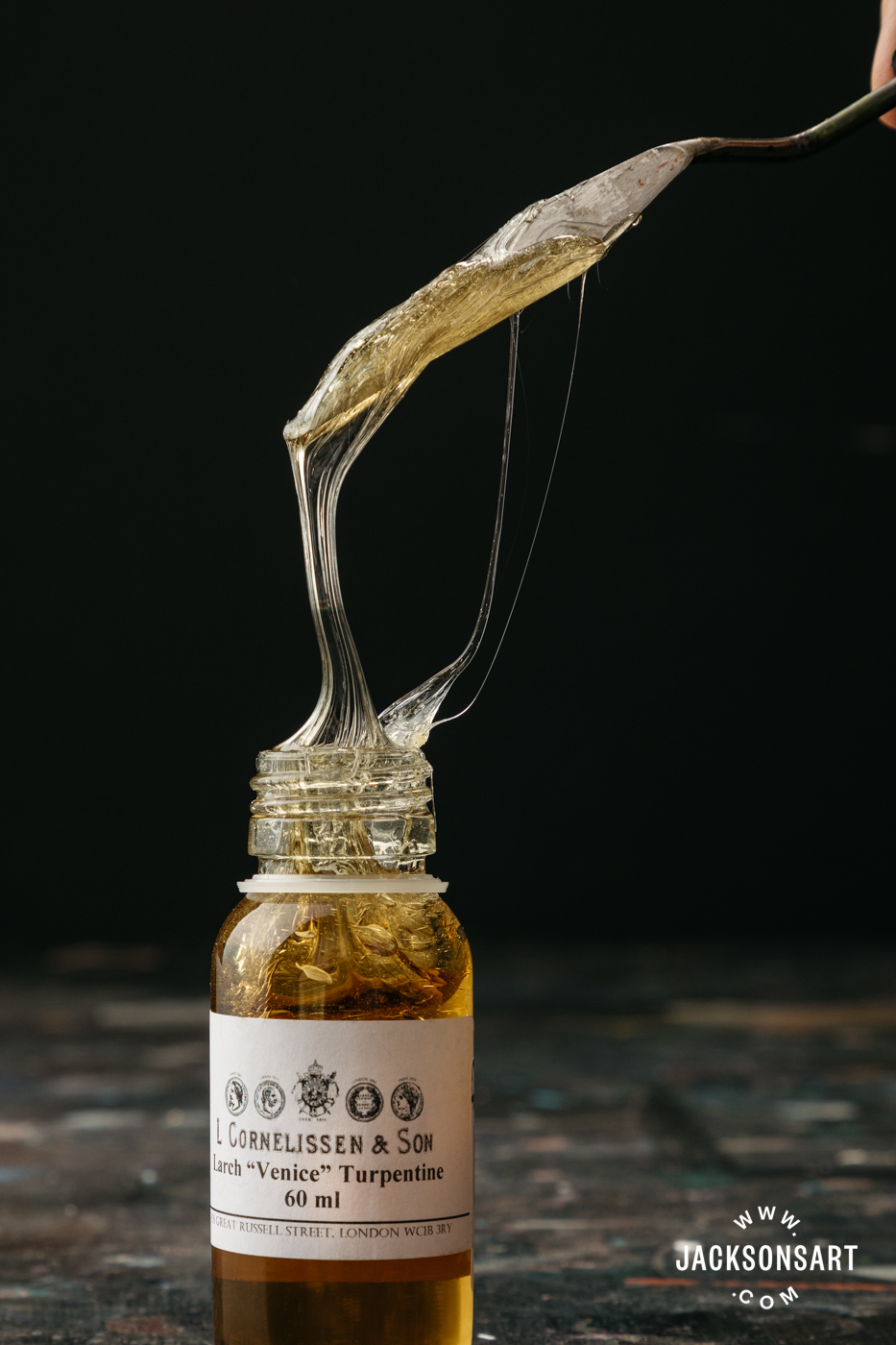 Trying to stir it and scoop some out while is at room temperature was a bit frustrating. It made strings like spun sugar that mostly accumulated on the palette knife and filled the opening of the bottle so the knife couldn’t go back into the bottle easily. It was very difficult to stir. 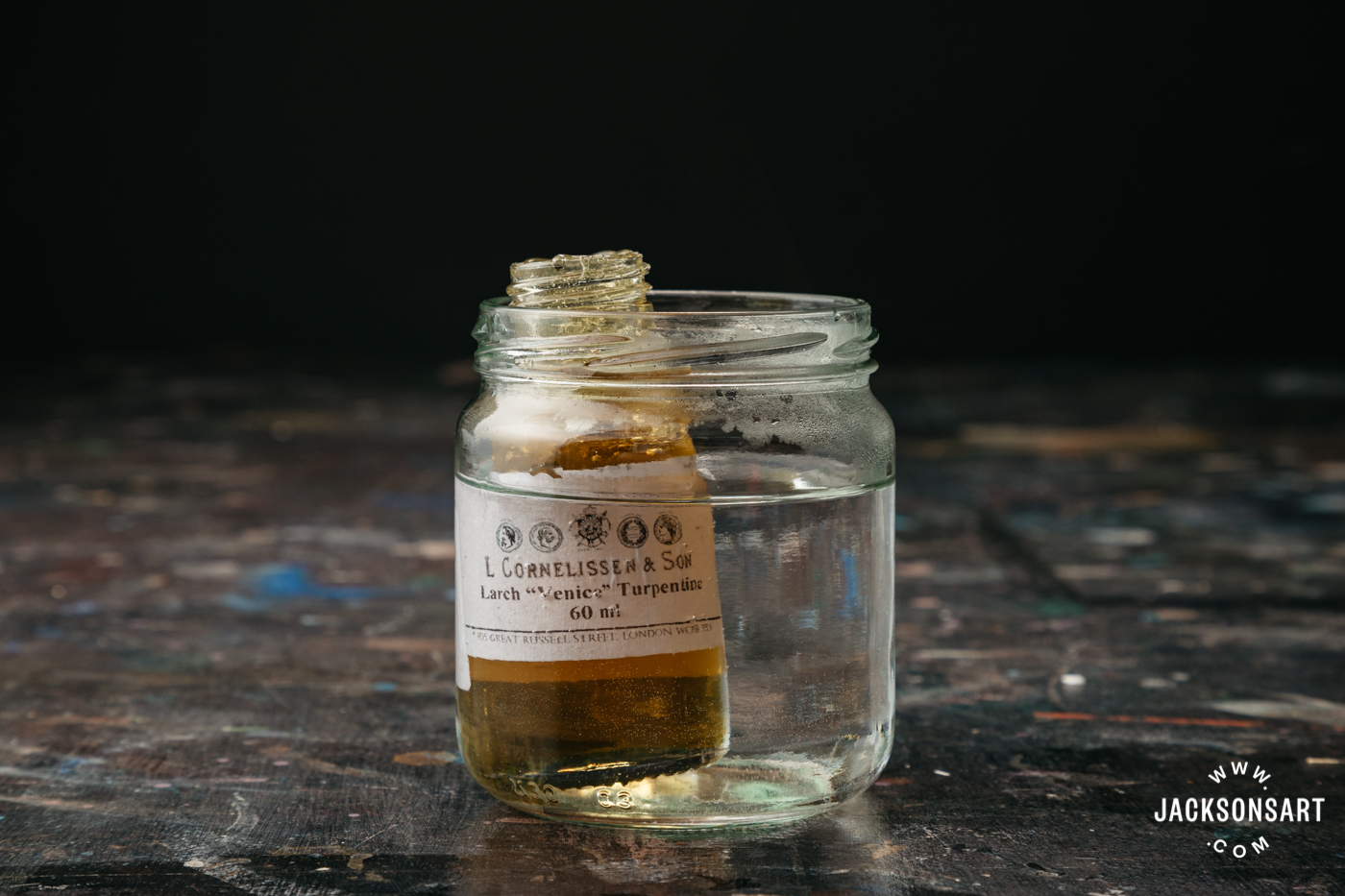 I placed the bottle of Venice Turpentine in hot water (but not over 50°C) for a few minutes and then began to stir. It took 3 changes of hot water until the resin was slowly warmed and became fluid enough to stir properly and scoop out. 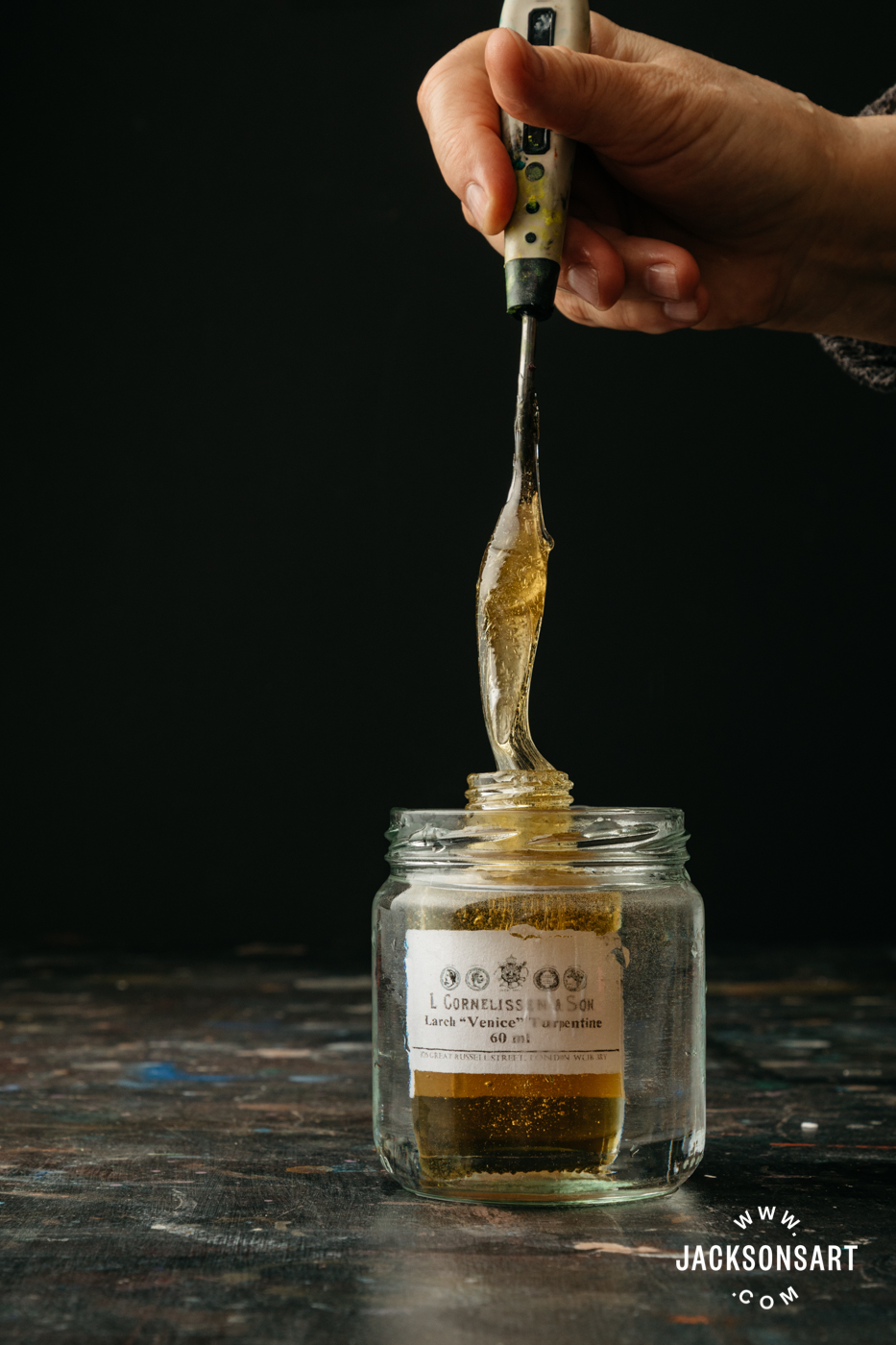 Here it is starting to warm but is still quite hard to stir and is clumping on the palette knife. I kept stirring and checking. 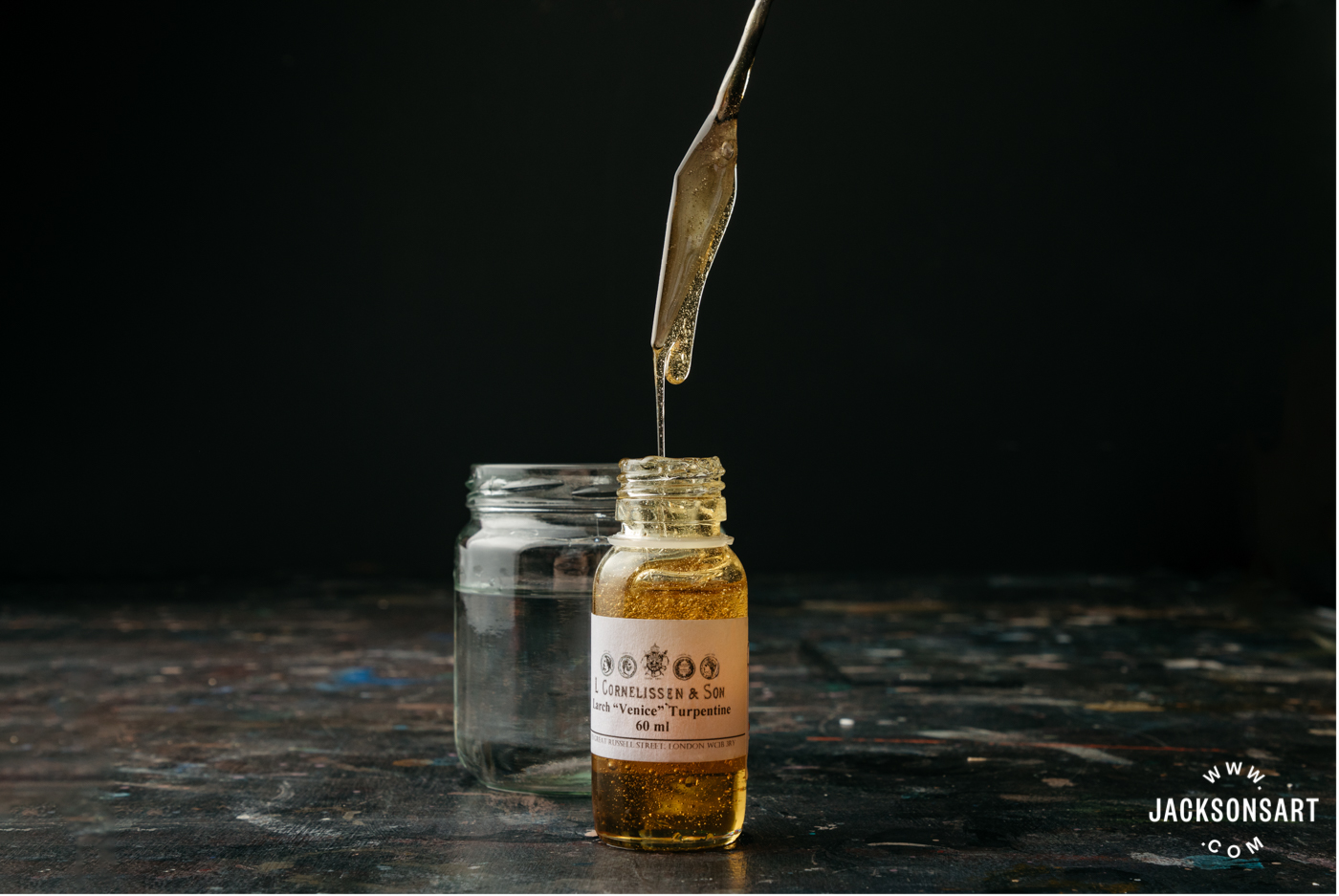 After is was gently but thoroughly warmed and stirred, it was like flowing honey. It thickened again quickly as it cooled. 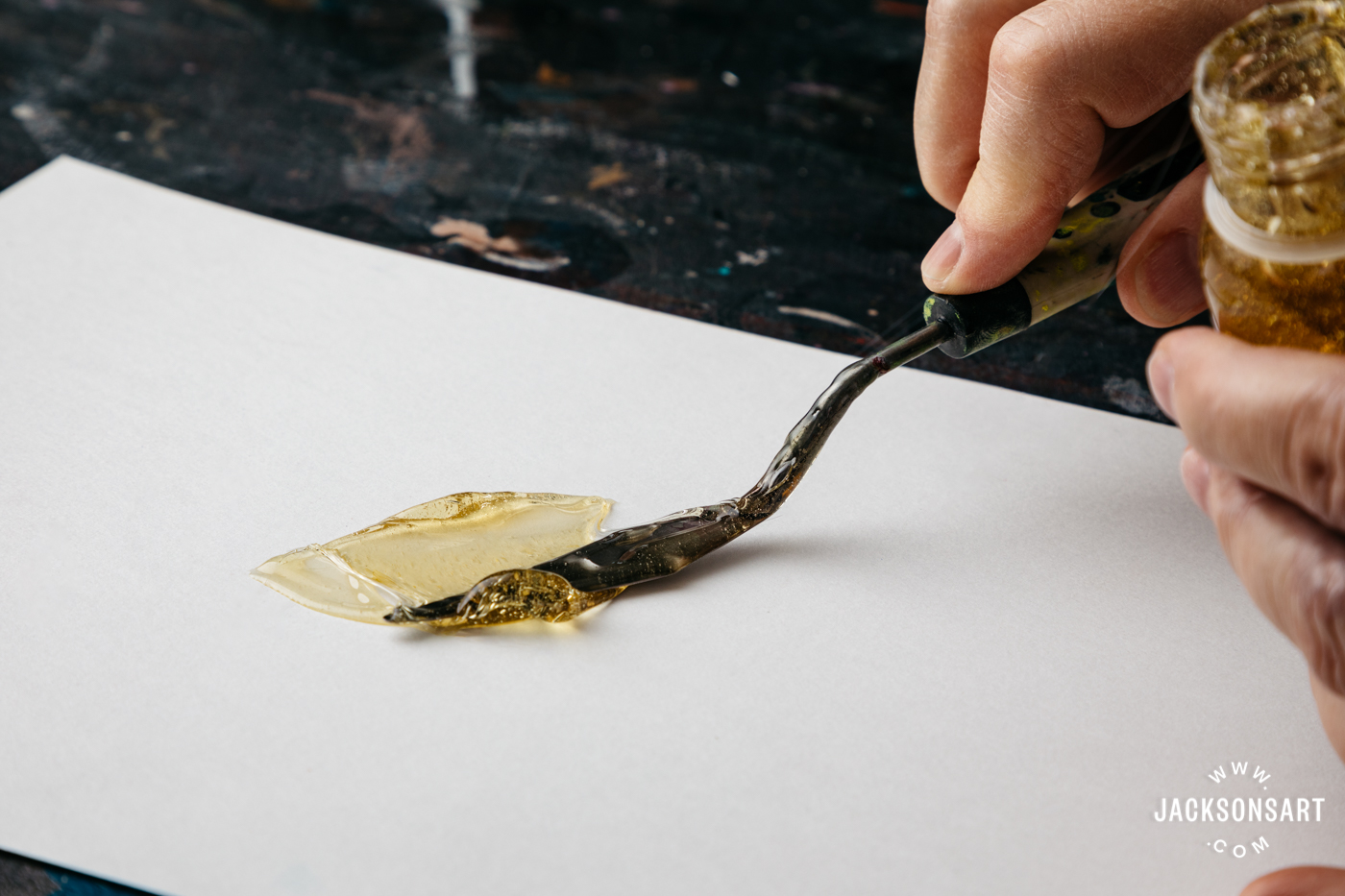 After warming and stirring it is fluid enough to spread on a palette.

It is a translucent golden yellow colour, paler than honey. It is such a highly valued resin because of this light colour, compared to many other resins, (though some painters prefer Canada balsam saying it is even lighter and more transparent). It smells like a pine forest. It’s incredibly sticky and hard to get off hands, gloves, and tools, like tree sap when it gets on your clothes in the woods. When trying to wipe the threads of a bottle clean so you can put the lid back on, the rag will just stick. But if you wet the cloth with hot water it will wipe clean, though the cloth may need to be thrown away after. 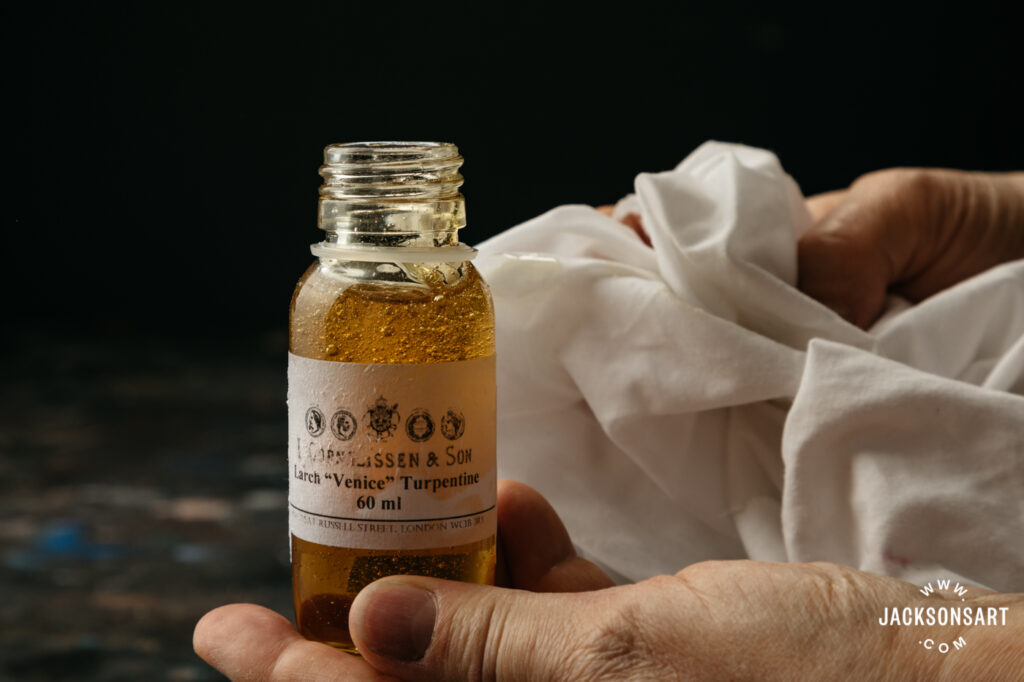 The hard gooey resin around the neck of the bottle needed to be removed in order to get the lid back on and so the lid wouldn’t be glued on. Hot water on a strong rag cleaned it quickly.

How to Use Resins

Varnishes can be prepared with natural resins (tree saps, also called gums) such as dammar, mastic, copal, Venice turpentine, Canada balsam, Strasbourg turpentine (made from Silver Fir balsam), elemi, amber, and others, by dissolving the resin in a strong solvent such as turpentine. A standard ratio would be three parts solvent to one part resin. In that sense, the resin can be thought of as a focus. Resin is added as a softener or plasticiser, to counteract hardness or brittleness in a varnish compound. (A small amount of beeswax can be used in the same way.) If a drying oil such as linseed oil is added to the varnish, you then have an oil painting medium. A simple medium recipe would be 1 part resin/balsam dissolved in 1 part gum turpentine solvent plus 1 part linseed stand oil. This is a ‘fat’ medium, intended for the uppermost layers of a painting. A small amount can be added to oil paint to give a tough, enamel-like surface, sometimes described as a “jewel-like” surface. Because both resin and stand oil level themselves out over a matter of 2 or 3 days while drying, it eliminates all brush marks, leaving a smooth, glass-like finish.

These are all soft resins and the paint films they produce are always more susceptible to damage during any restoration than paint films made without the resins because even when they are dry they remain more susceptible to solvents than the dried oil binder. There are also issues with yellowing, darkening and brittleness when adding soft resins to oil paint, so it is recommended to only use them sparingly, usually less than 5% and never exceeding 10% of the total mix.

Michael Harding makes a few oil painting mediums that use natural resins, including the Balsam Resin Glaze Medium made with Venice turpentine and the Oleo Resin Medium made with Canada balsam. 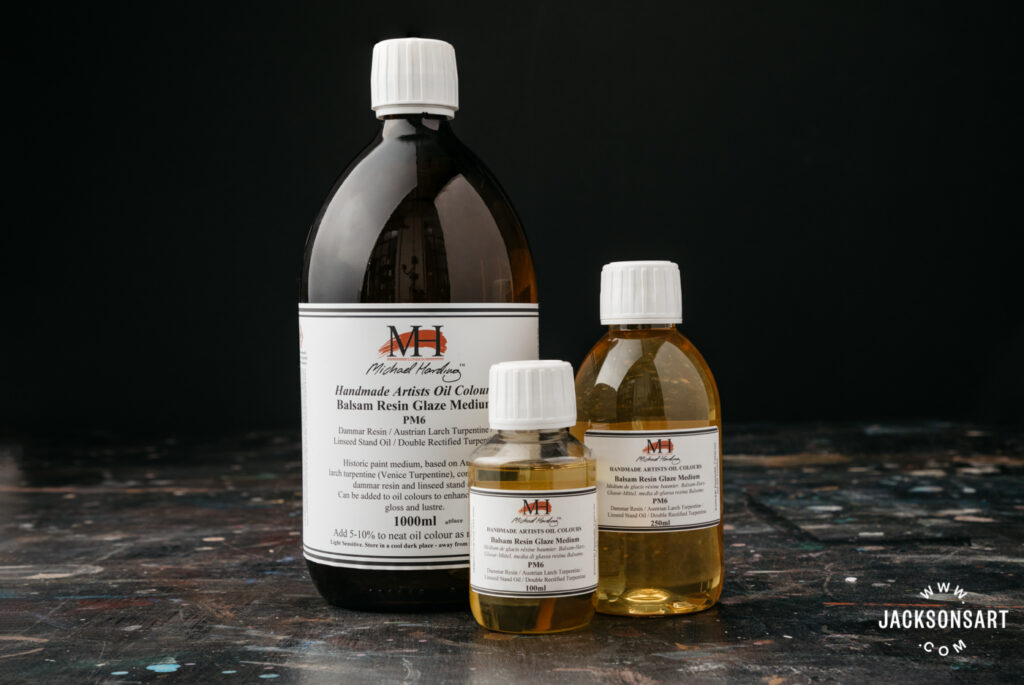 The modern, improved alternative is varnishes and mediums made with alkyd resins. Alkyd resin is synthesised from plant and vegetable oils, like linseed or soya oil, that is modified (oil-modified alkyd resin) for use in artist’s oil paints, mediums and grounds. When it is dry, alkyd is tough, flexible and resistant to solvents. Alkyd resin doesn’t age or discolour like natural resins do. Alkyds act much like natural resins, but do not need the strong solvents that natural resins need to dissolve. Because they only need mild solvents to put them in solution as mediums, it makes them safe to use.
Alkyd Oil Painting Mediums

Links to the Supplies Mentioned

Tree images are from Creative Commons.