Kay Gasei creates mixed-media artworks that contain symbolism, and follow the narratives of various figures, objects and characters. In this article, he tells us about how his daily use of different sketchbooks helps him to develop ideas while exploring the potential of his chosen art materials.

Kay Gasei Takes us Through his Sketchbook Practice

I’m usually juggling between sketchbooks with no real method or linearity, except from the fact that the pages follow one after the other. The different purposes of the sketchbooks present themselves when the occasion arises that I need to formulate a series. However, generally I’m just constantly doodling and putting down notes and ideas. On average I have three sketchbooks on the go at once, alongside my phone notes. One of these will be an A6 pocket-sized sketchbook, the second an A4 one for developing ideas from the pocket-sized one, and an A3-ish size to coalesce the content of the A6 and A4 into a series, or just see what they look like side-by-side. 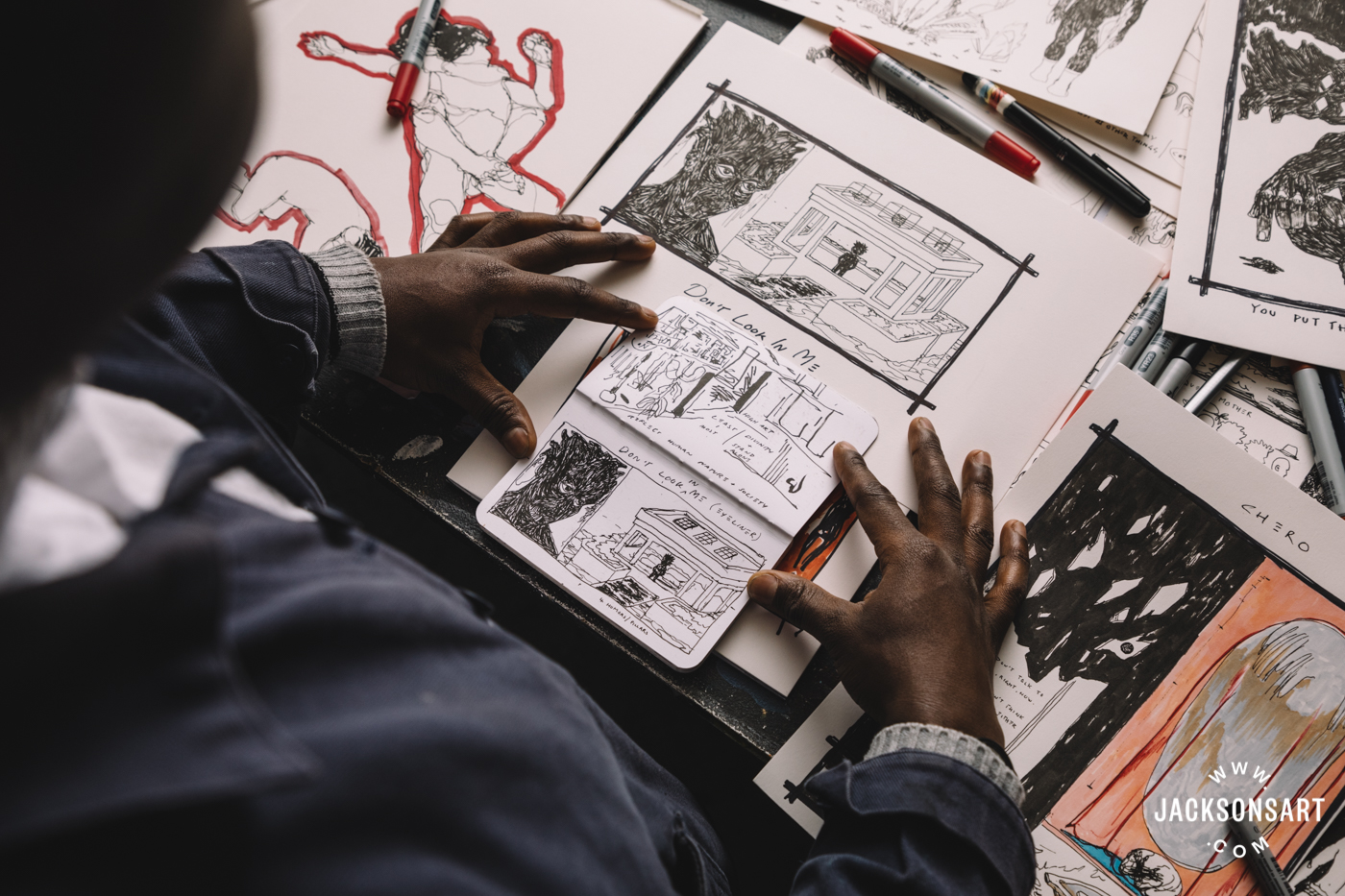 I usually use an A6 Moleskine or Stillman & Birn for the pocket sketchbooks, although more and more these days it’s a Stillman & Birn because the paper is heavier (around 270gsm). Most of the time, I’ll use a Daler Rowney pink covered Smooth heavyweight sketchbook for my A4-sized one. It’s 220gsm and has pages that you can tear out – it’s good for all materials. 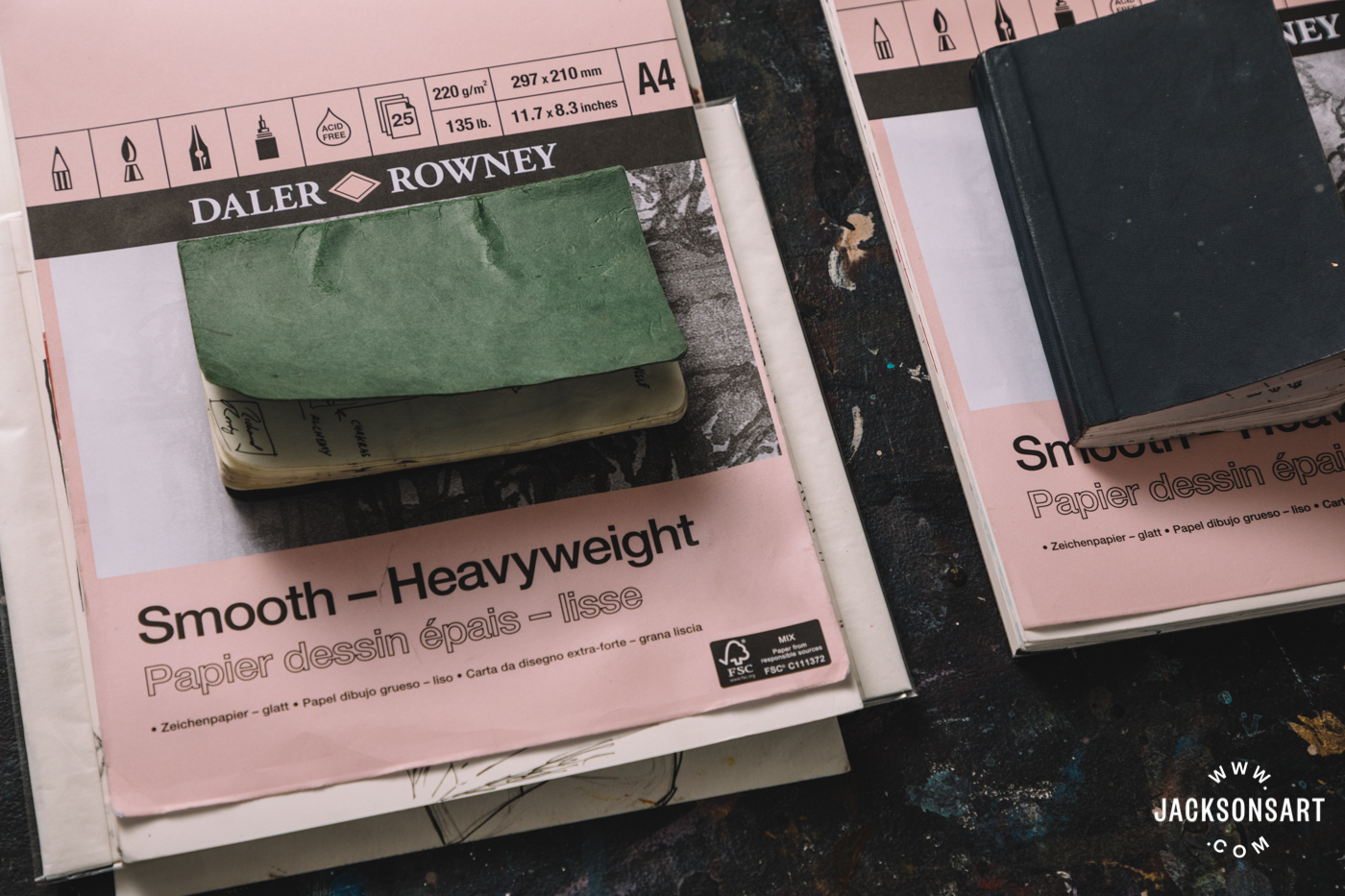 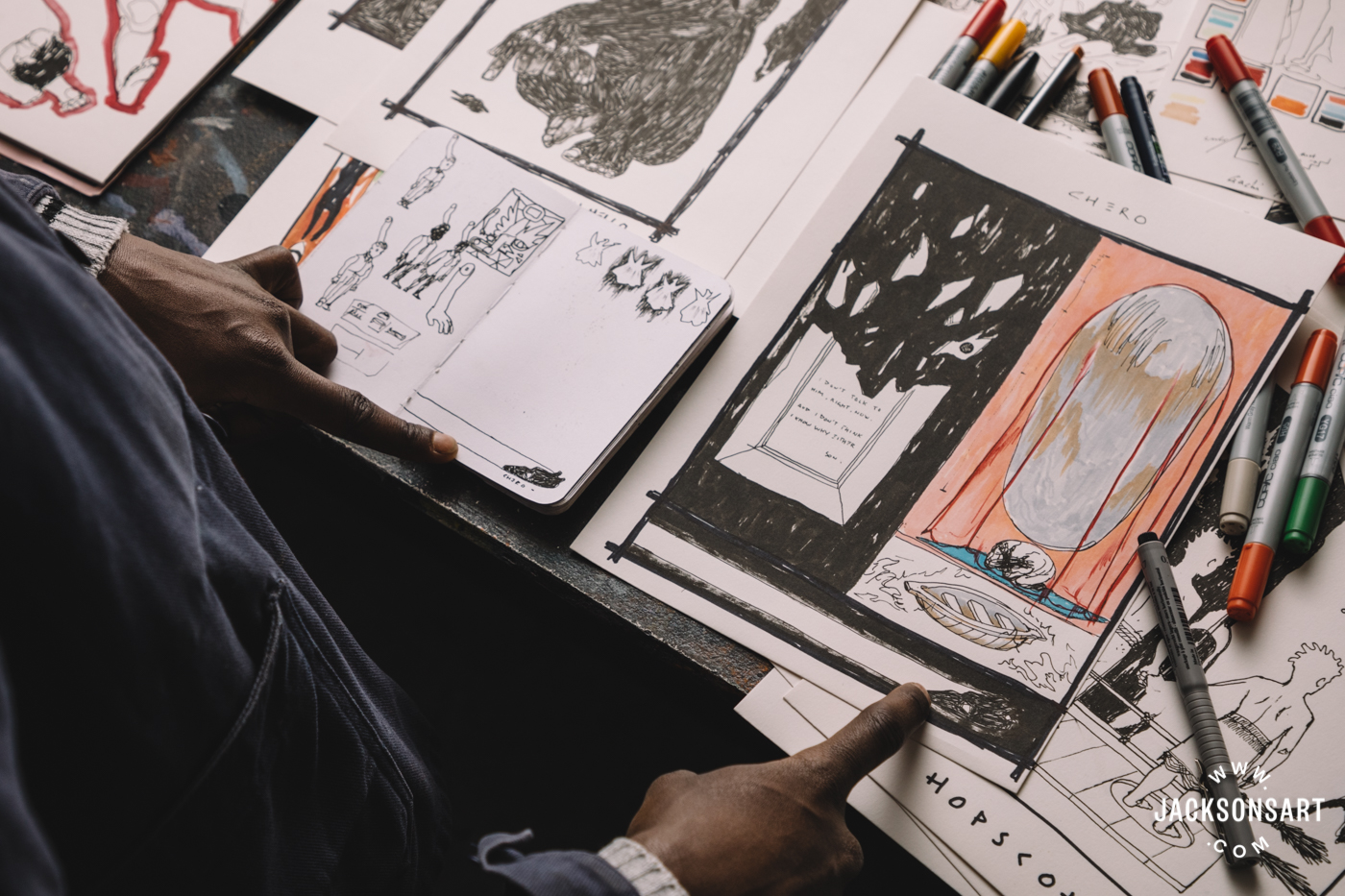 Funnily, during my degree which was illustration and involved following a narrative, I used to find the storyboard element pretty annoying. However, now with these A3 pages I’m using, it’s my go-to drawing format to create six or so ‘blocks’ of drawings in two rows of three. 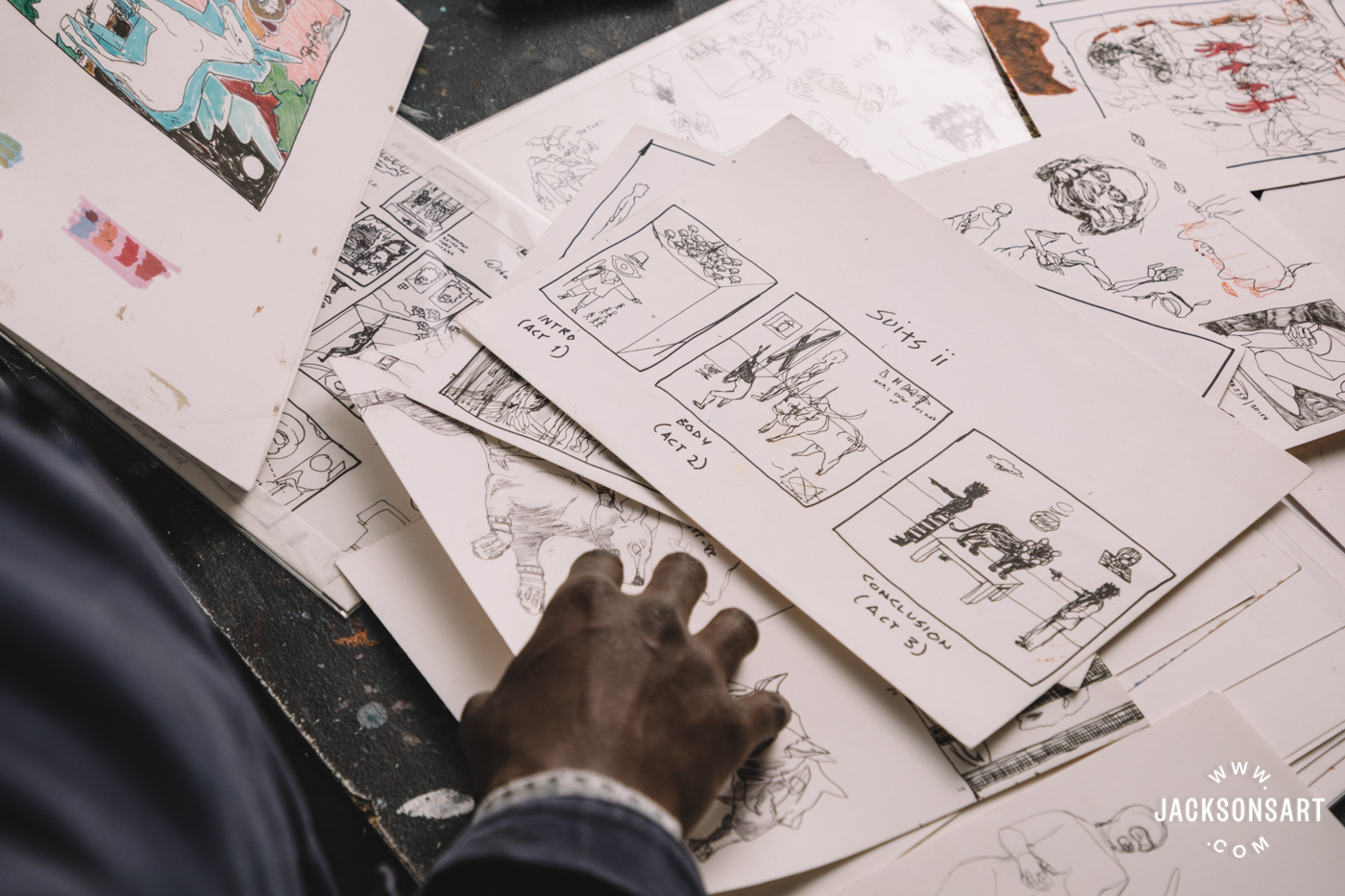 My default material to draw with is a fine liner or brush pen: Faber-Castell, Uniball, Staedtler, Copic and Pentel japan brush pens. Any variation of these is the baseline, then any other material I use is an accessory or an extra detail. 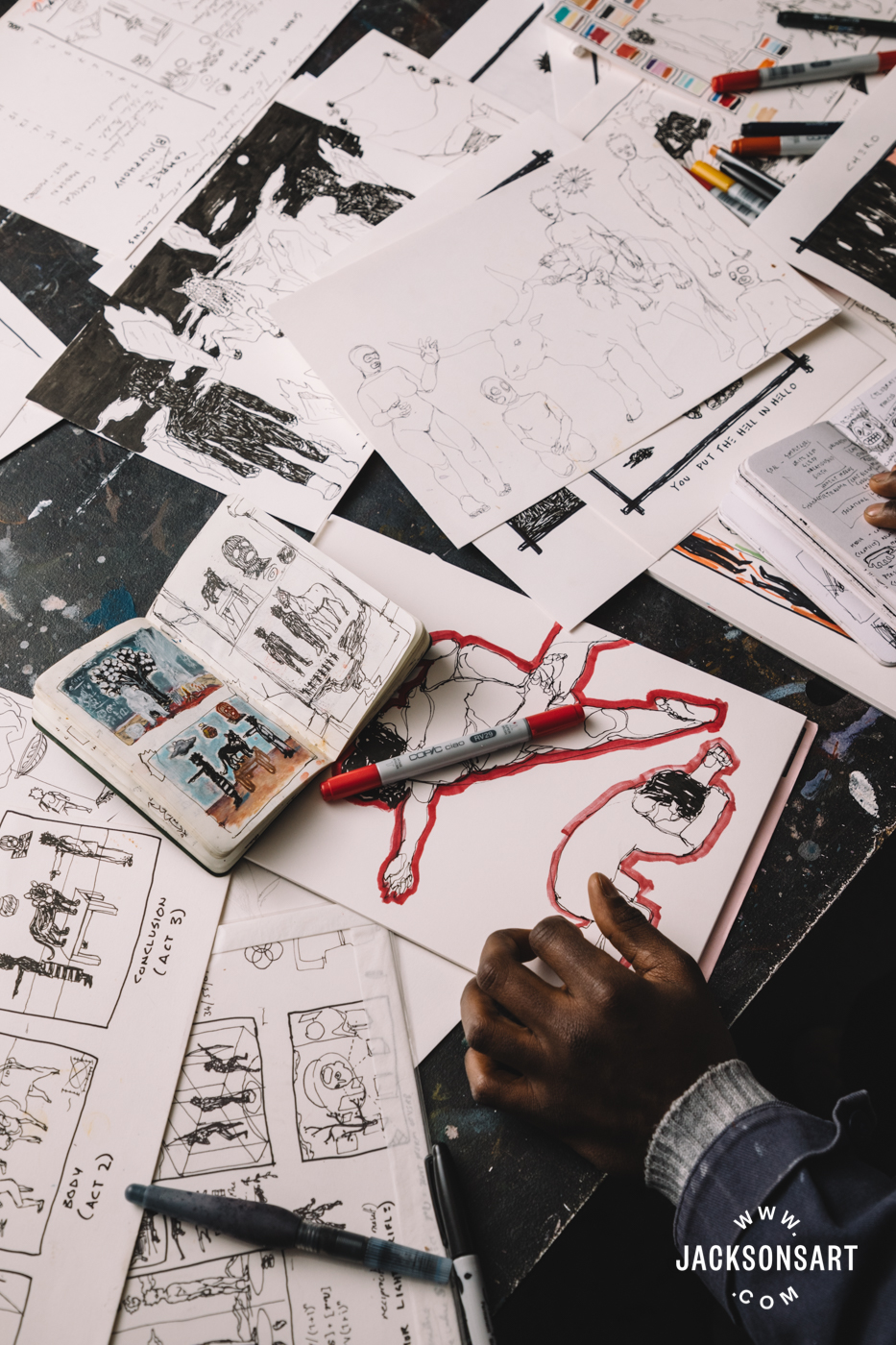 Next amongst my most used materials would be Copic Markers. The color range is good, they’re strong and they blend really well together if you don’t want to get messy with watercolor paints or oils. Although, I do like to use watercolors and oils too, along with ink washes. I don’t use them too much, but I’m attempting to incorporate them more as my work is moving into a place where oils are the ‘final frontier’. I rarely use pencils anymore, instead I’m just drawing immediately with something permanent, dry media uses for areas I want leaving to texturize or create last additions to final pieces. 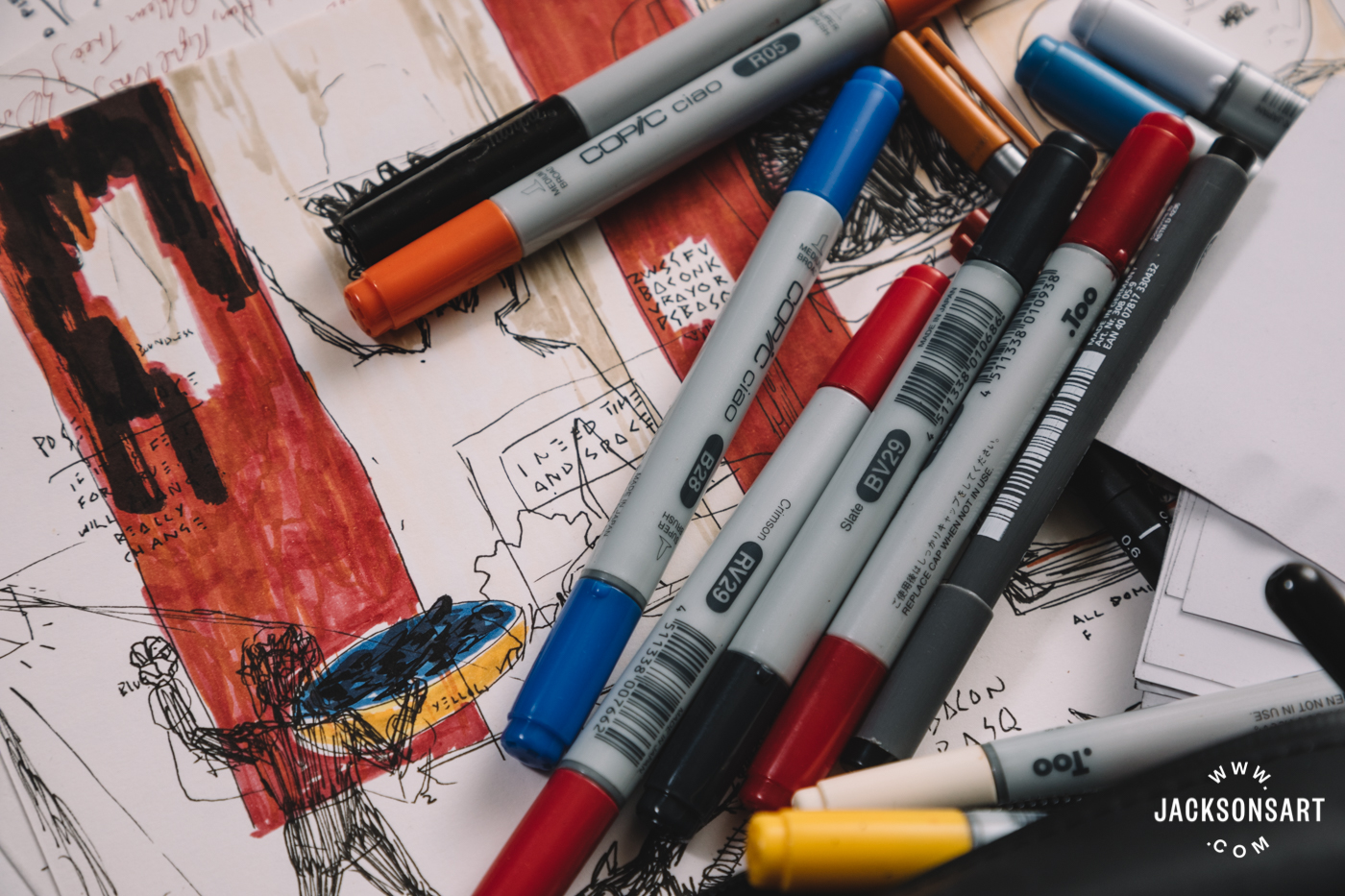 I use my sketchbooks all the time. I always have at least my pocket-sized sketchbook on me and definitely add something to it daily, sometimes even knowing it’s superfluous while doing so. I refer to my sketchbooks constantly, and sometimes I don’t necessarily want some ideas to leave them – some stuff is personal in a vulnerable way, other times it’s silly. Occasionally, I think some ideas are real ‘wannabe-high-brow’ and I think to myself: ‘No one needs to see or know of this!’. 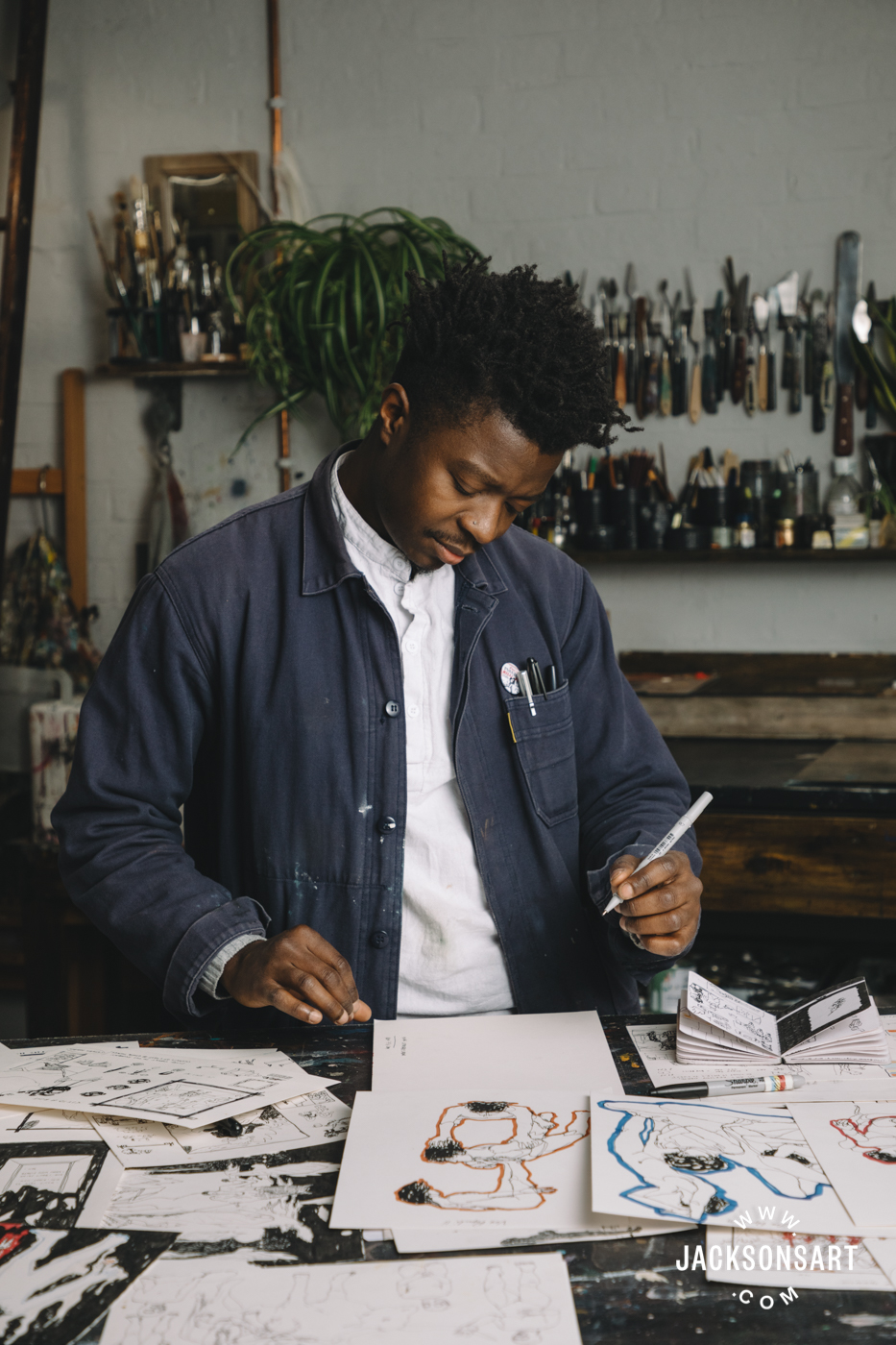 Some ideas are like a ‘eureka moment’, and once they are drawn in the sketchbook, they don’t tend to change once translated onto a larger canvas, digital format or however I choose to recreate them. In contrast, other ideas are really slow for me to develop. 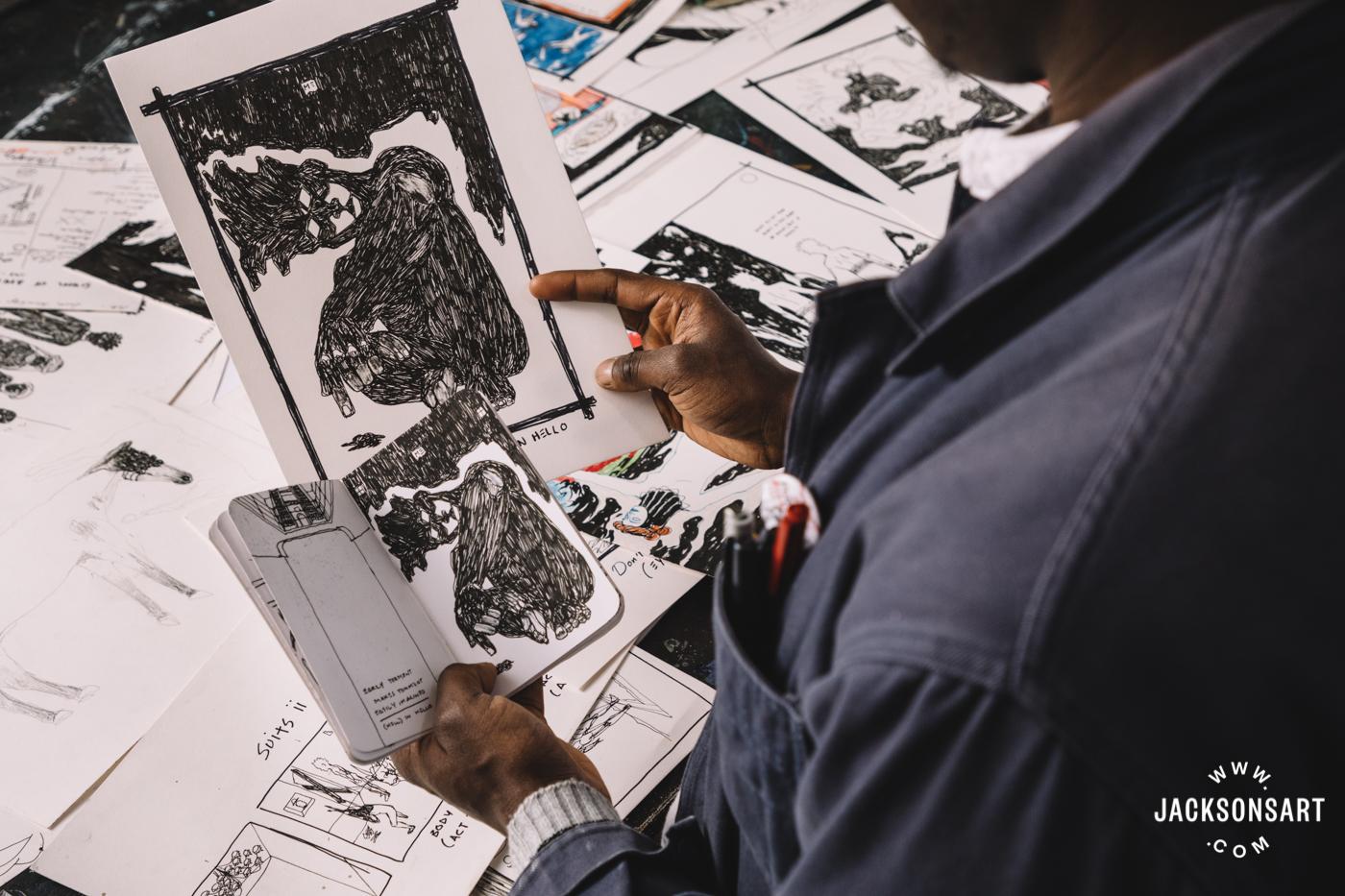 I’ll put most thoughts and feelings down as either writing or a quick visual. Then sometimes that random anecdote or tidbit comes back anytime between the following week and a couple of years later. It’s really interesting to see the pages over the years, and see how me, my ideas and my drawings develop, but still continue to have a thread that allows everything to dovetail from the nebulous pieces. 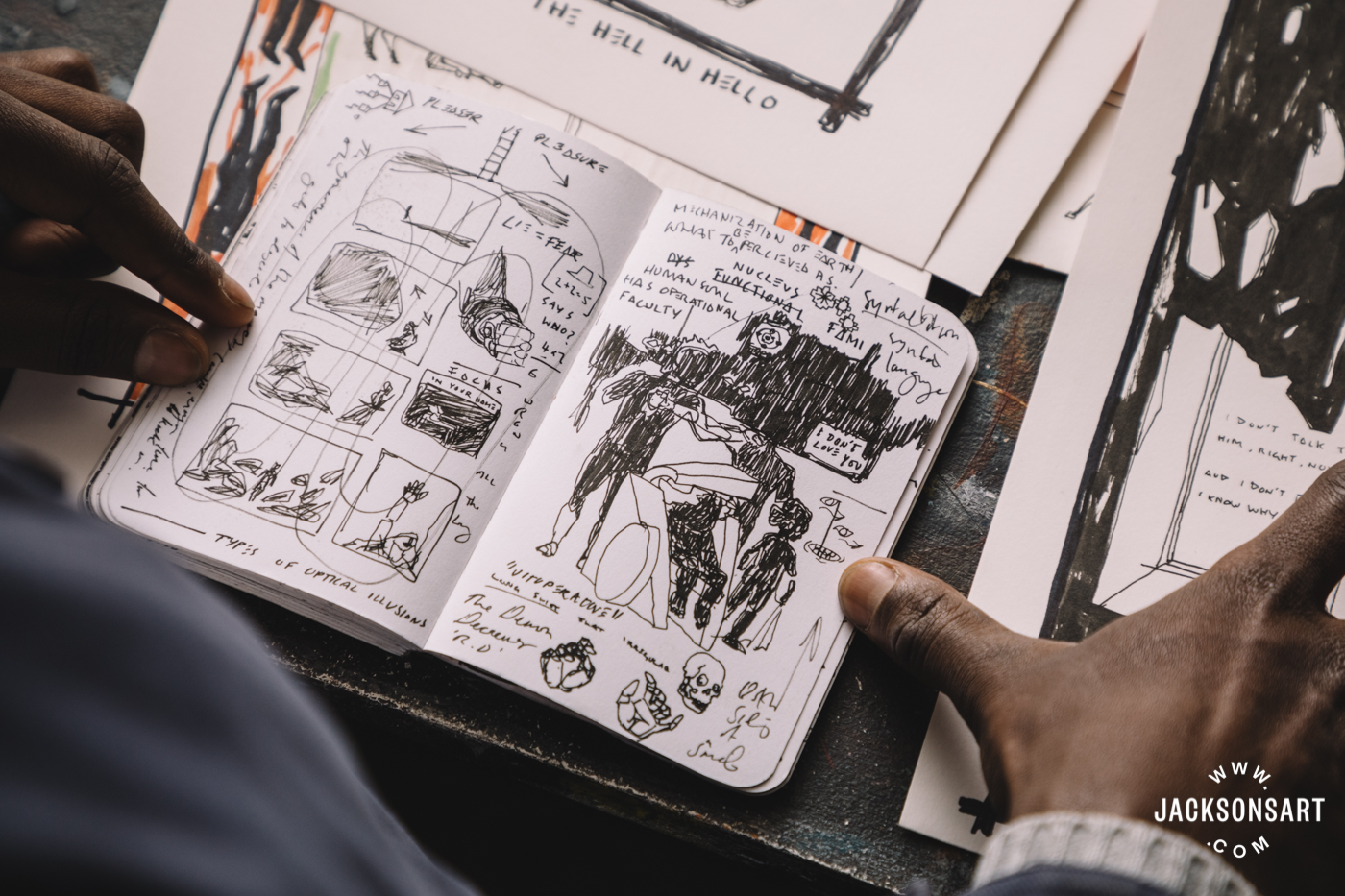 The use of sketchbooks is just fundamental to me, I don’t know any other way. My advice to other artists using them is to keep one on you at all times and don’t think about it too much. By that I mean don’t be so precious about them having to look a certain way. I used to be really considerate about how they should look and be composed, but that hindered my ideas and is probably a reason why my work was a lot more boring than it is now (among other reasons). I conducted something personal for an ‘invisible other’ rather than myself. 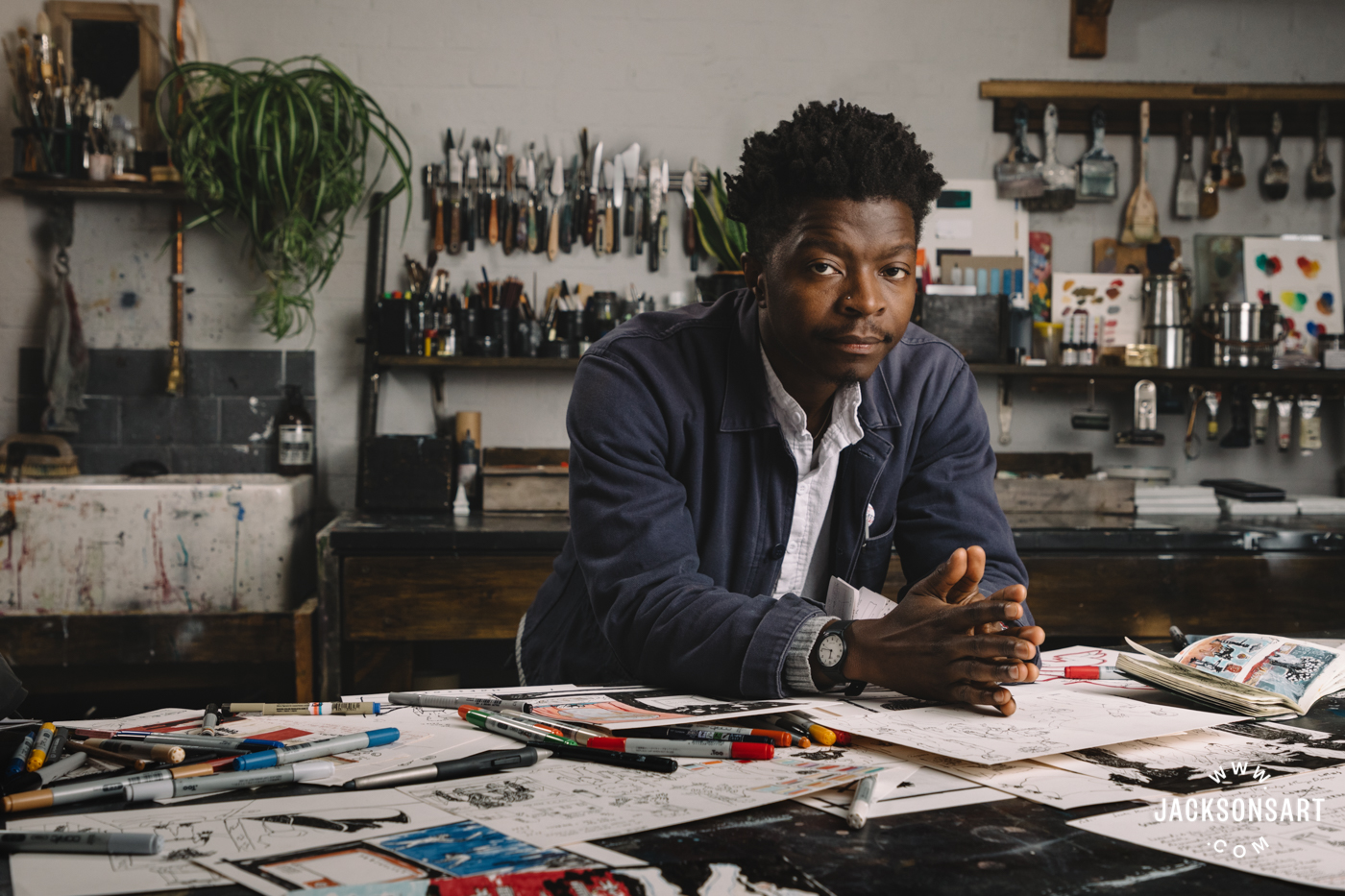 Kay Gasei is an artist based in London. He originally studied illustration at Oxford Brookes University before returning to London to continue his practice. Since then, he became the first Soho.Home.Studio artist-in-residence at Soho House. This Spring, Kay has an upcoming exhibition between 20th April – 6th May 2022 at Reem Gallery, London.

Everything you Need To Know about Drawing Paper

Oil Painting For Beginners: What You Need To Get Started

For Those Who Love To Draw: Four Artists Test Our Drawing Materials

Inside The Sketchbook Of Jessica Jane Charleston

As the Editor of Jackson’s Art Blog, Annie commissions and plans features, while also occasionally writing them herself. Her background is in publishing and she has written for a number of creative magazines. She is also a practicing artist with an interest in natural history.